Belek [TURKEY]: Gavin Green was left frustrated by the greens of Montgomerie Maxx Royal course on the opening day of the $7 million Turkish Airlines Open as he finished on one-over par 73.

Playing in the last group of the day from the 10th tee, the 25-year-old Malaysian was faced with greens at their bumpiest, and an early three-putt bogey on the par-5 13th did not help his cause.

He then made another bogey on the 14th hole, before knuckling down to finish with 12 pars and a solitary birdie on the first hole.

“It was a very frustrating round, especially when I thought I hit the ball great today (15 greens in regulation). Nothing seems to be dropping. I hit it to within eight feet on the last three holes and walked away with pars on each of them,” said Green, ranked 68th in the Race to Dubai.

“I only made one bad putt the whole day to make a bogey on the 14th hole. Apart from that, I thought my putting stroke was good throughout the day but I could not get the ball in the hole.”

Speaking to The ClubHouse on Tuesday, Green had mentioned how he felt like a “new man” after spending three days with his coach Chris O’Connell in Kuala Lumpur last week. This was after he struggled with his hitting over the last few weeks.

On Thursday, it was his ball-striking that gave him optimism of coming back into contention in the tournament despite being eight shots adrift of joint leaders – England’s Tom Lewis, who birdied six of his last seven holes, and Austria’s rising star Mathias Schwab at seven-under par 65.

“I am very happy with the way I was hitting and I was able to control the golf ball. That’s the positive that I can take from this round. Hopefully, if I keep hitting it like today and the putts drop tomorrow, I don’t see any reason why I can’t have a low round,” he added. 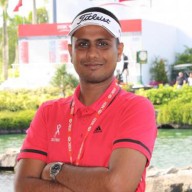